​Canadian Northland Power Inc. will be PKN ORLEN’s strategic partner for its offshore wind farm project in the Baltic Sea. The Partnership will be responsible for the preparation, development  and operation of the offshore wind farm with a capacity of up to 1.2 GW. Northland Power Inc. will ultimately acquire a 49% interest in the project, due to start in 2023 and scheduled for commissioning in 2026.

“The selection of a partner for our offshore wind farm is a milestone in this pioneer project for the region. By combining our local experience, gained in the advanced preparatory work, with the global offshore wind expertise of Northland Power Inc., we will be well placed to quickly and effectively deliver subsequent stages of the project. We are happy to have found a partner whose business model and vision for energy transition are in line with the ORLEN Group’s long-term plans. Our cooperation will provide a major growth stimulus for the offshore industry, including Polish companies along the supply chain,” said Daniel Obajtek, CEO and President of the PKN ORLEN Management Board.

PKN ORLEN will collaborate with Northland Power Inc. on the Baltic Power project, involving the preparation, development and operation of an offshore wind farm with a total target capacity of up to 1.2 GW, which intends to apply for the 25-year Contract for Difference support scheme. By joining the project, the Canadian group will ultimately acquire a 49% equity interest, following a series of capital increases at Baltic Power. The agreement term is to be 35 years, thereafter to be converted into indefinite. The joint venture is subject to antitrust clearance. Until then, the agreement is conditional.
Northland Power Inc. is a Canadian company listed on the Toronto stock exchange (NPI:TSX) with more than 30 years of experience in the design, implementation and management of power generation projects. Its low- and zero-carbon energy assets located on four continents include 2.6 GW of generation capacity in operation and another 1.4 GW under construction or at advanced planning stages.

Ranked among the world’s top 10 companies active in offshore wind, Northland Power Inc. is a developer, owner and operator of offshore wind farms operating in Europe and projects currently under construction in Asia. The installed generation capacities of its offshore wind farms are nearly 1.2 GW, comprising three farms located in the North Sea in Europe, namely Gemini (600 MW), Nordsee One (332 MW) and Deutsche Bucht (252 MW). Northland Power Inc. is also well advanced in preparing the Hai Long offshore wind farm project located in the Taiwan Strait, whose total capacity will be 1 GW, and offshore wind projects in Japan (600 MW) and South Korea (1 GW), which are still at early stages. Its other low- and zero-carbon energy assets include 130 MW of photovoltaics, 394 MW of onshore wind, and 973 MW of gas.

“Today's announcement reflects Northland's continued growth and leadership in renewable energy and strengthens our position as a global leader in offshore wind development. We are excited to partner with PKN ORLEN to expand our presence in Europe through the development of the Baltic Power offshore wind project, but more importantly, further contribute to the global decarbonization transition by helping Poland fulfill its renewable energy ambitions,” - said Mike Crawley, President and CEO of Northland Power Inc.

NP Baltic Wind B. V. of the Netherlands, which is a wholly-owned indirect subsidiary of Northland Power Inc. will be a direct shareholder of Baltic Power after the joint venture agreement is in full force and effect. As a part of the contributions in cash to cover Baltic Power shares that are to be acquired by NP BALTIC WIND B.V., NP BALTIC WIND B.V. plans to invest ca. PLN 290 m in 2021 for Baltic Power development.

The construction of an offshore wind farm in the Baltic Sea is one of PKN ORLEN’s key development projects, in line with the ORLEN Group’s strategy to invest in low- and zero-carbon energy sources. The ORLEN Group is working on the development of offshore wind power through its subsidiary Baltic Power, which holds a licence to construct a wind farm with a total capacity of up to 1.2 GW. The licence area, of approximately 131 km2, is located about 23 km north of the Baltic coastline, roughly at the latitude of Choczewo and Łeba.

Onshore part of grid connection assets of the Baltic Power offshore windfarm, that include onshore cable lines, onshore substation and overhead lines connecting Baltic Power substation with National Grid will be constructed in the Choczewo commune in Northern Poland. 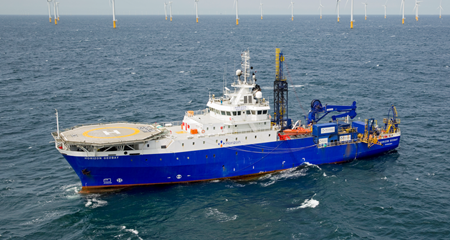 ​Twelve specialised vessels are beginning the main phase of geotechnical surveys of the Baltic Sea bottom in the area of the planned wind farm and along the connection route. Completion of the tests is scheduled for later this year. The results will provide a basis for the development of a detailed plan of locations of the foundations for the turbines and offshore substations and their connection to the onshore transmission infrastructure.