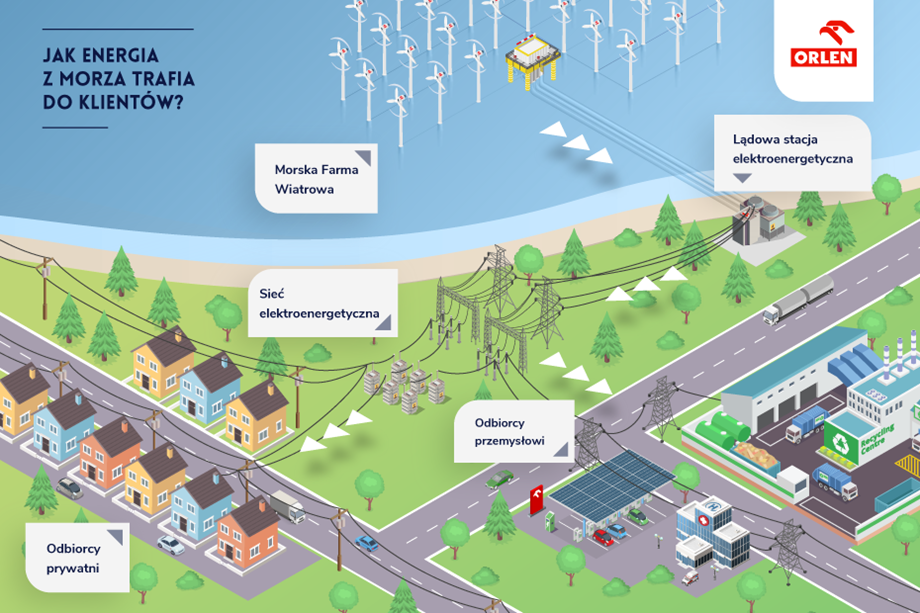 Baltic Power, a member of the ORLEN Group, has signed a grid connection agreement with Polskie Sieci Elektroenergetyczne for its offshore wind farm in the Baltic Sea. The agreement marks another milestone in preparations for the wind farm project, providing a guarantee that clean energy generated by offshore wind can be fed into the national power system.

‘We aim to start producing electricity in the Pomerania region in the coming years that will power up to one million households. This is a huge venture requiring a significant extension of the transmission network in the north of Poland. Investments in this segment will need to be made by Polskie Sieci Elektroenergetyczne. The agreement we have signed is a clear sign our project is entering the advanced phase of preparations,’ said Daniel Obajtek, President of the PKN ORLEN Management Board.

The ORLEN Group is making preparations for the construction of an offshore wind farm in the Baltic Sea with a capacity of up to 1.2 GW. The project will be located approximately 23 kilometres off the coast of Łeba and Choczewo. The electricity generated by the wind farm will be exported via an underground cable connection linking the turbines with an onshore power station. A Polskie Sieci Elektroenergetyczne-operated station will be built specifically for the purposes of receiving and transmitting electricity from offshore wind farms in the Baltic Sea.

One of the pillars of the ORLEN2030 strategy unveiled late last year is to expand the power generation business through investments in low- and zero-emissions generation sources, with PLN 47bn to be spent on such investments, including offshore wind, by the end of the decade.

​The ORLEN Group is the first fuel and energy company in Central Europe to declare an intention to achieve emission neutrality by 2050. By 2030, the Group will reduce its CO2 emissions from its current refining and petrochemical assets by 20%, and CO2/MWh emissions from electricity generation assets by 33%. The project to build an offshore wind farm, now at an advanced stage of preparation, is one of the key ventures that will be instrumental in achieving these objectives.

​Canadian Northland Power Inc. will be PKN ORLEN’s strategic partner for its offshore wind farm project in the Baltic Sea. The Partnership will be responsible for the preparation, development and operation of the offshore wind farm with a capacity of up to 1.2 GW. Northland Power Inc. will ultimately acquire a 49% interest in the project, due to start in 2023 and scheduled for commissioning in 2026.