The Baltic Power offshore wind farm is an essential element of transformation of the ORLEN Group and a milestone in the development of the Polish power sector. As early as in 2023, we will start the construction of an up to 1.2 GW offshore wind farm, expected to ultimately supply clean electricity to even a million households in Poland.

The Baltic Power offshore wind farm is the ORLEN Group’s key project supporting transition towards a clean, low-carbon economy. Renewable energy sources, including offshore wind farms, will be a springboard for our sustainable development in the years to come. Located 23 km to the north of the Polish coastline, on the level of Choczewo and Łeba, Baltic Power is one of the most advanced projects planned in the Polish Exclusive Economic Zone in the Baltic Sea. We hold a licence to construct an up to 1.2 GW wind farm, but its final capacity will depend on a number of factors, such as the geological conditions of the Baltic Sea bed, environmental conditions and technological developments.

Construction of offshore wind farms is a complex and multi-stage process. According to the adopted schedule, the construction of the farm is planned to start in 2023 and its commissioning in 2026. It will involve development of infrastructure consisting of some 100 wind turbines in an area of more than 130 km2. Depending on what technology is eventually chosen, each turbine will be about 270 m high.

Offshore wind power generation is one of the fastest growing energy sectors in Europe. With its increasing efficiency and low environmental impact, this technology already provides clean and competitively priced electricity to millions of Europeans. Waters of 11 countries are the site of 20 GW of offshore wind energy capacity, of which about 2,2 GW is located in the Baltic Sea. Based on experts’ estimates, the Baltic Sea’s total potential is 83 GW, nearly twice as much as the total electrical capacity currently installed in Poland.

The Polish State National Energy Policy (PEP2040) outlines the potential of and assumes the development of offshore wind energy in the area of the Polish Exclusive Economic Zone of the Baltic Sea, with the capacity of aprox. 5.9 GW in 2030 and up to 11 GW in 2040. Offshore wind farms in the Baltic may play a key role in Poland’s energy transition, contribute to the strengthening of the country’s energy security, and help tackle air pollution. 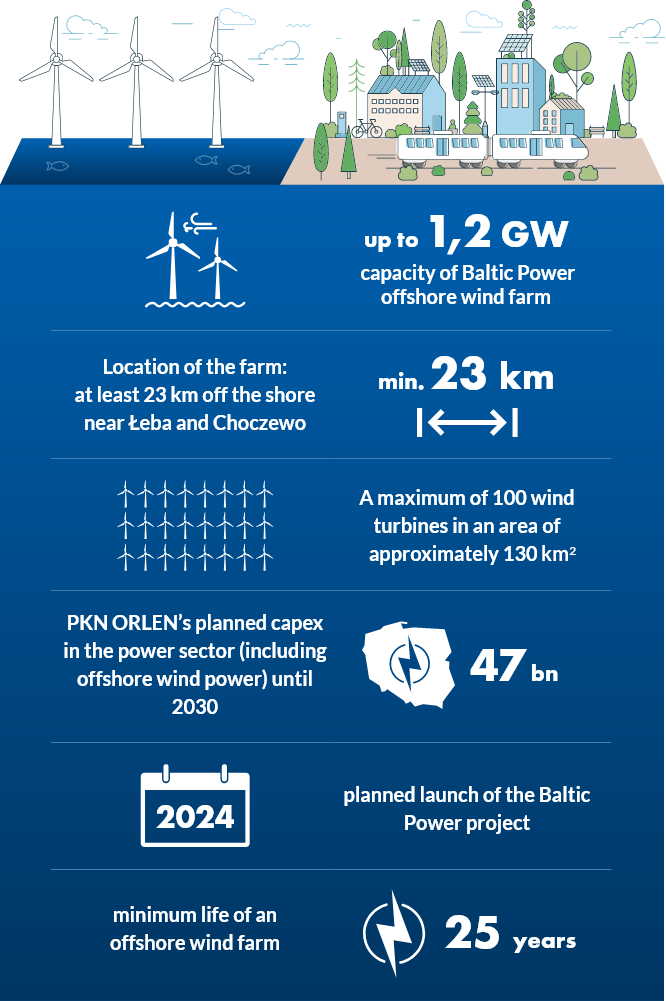